Inside the Chernobyl exclusion zone and ghost town of Pripyat 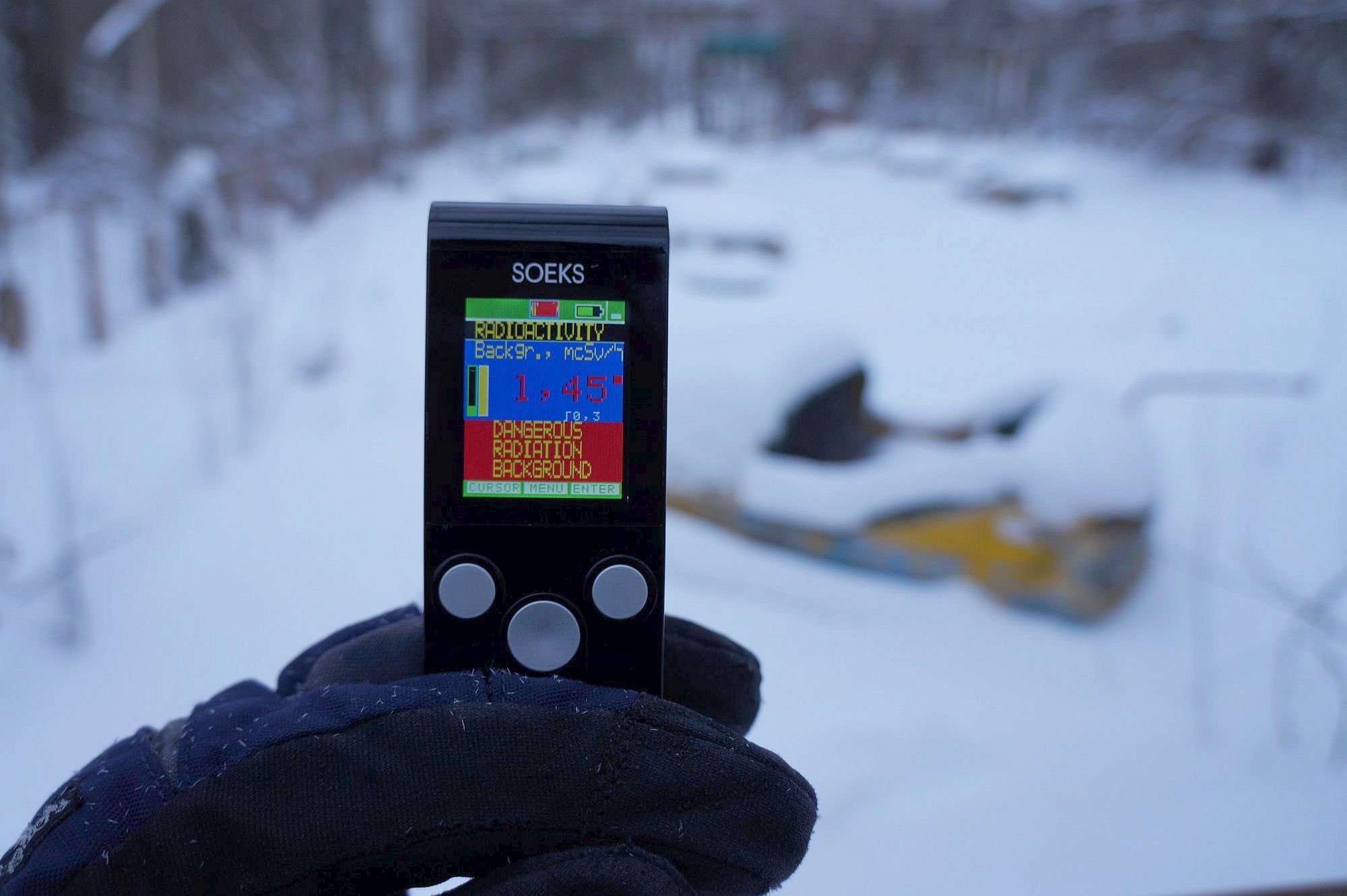 I took a visit inside the Chernobyl 30 kilometre exclusion zone in the winter, then moved on to the ghost town of Pripyat, which was evacuated following the nuclear power station going into meltdown in April 1986.
Click on any image to see it in full size. Video at the bottom of the page.

After passing the military outpost, I entered the “exclusion zone”, 30 kilometres from the reactor core which went into meltdown three decades ago. The first stop was a small settlement; a collection of homes and a shop.
30 years after the accident, my meter now shows radiation levels around normal; safe for habitation.

A small convenience shop which fell victim to looters once the area was evacuated.

Neighbours attempted to nail their doors closed when they had to leave. This was no match for the looters.

Ripped up floors in every home.

The floors in these homes were all ripped up by looters (and army soldiers) searching for hidden valuables, considering the occupants had to leave in a matter of minutes.

This is the entry sign to the small township of Chernobyl, about 14 km away from the nuclear power station.

A statue created by the firefighters which are still based there today.

Gone but not forgotten.

The statue pays tribute to those who died; not only firefighters.

A dead lunar rover sits among its comrades. These were some of the remote-controlled machines used to remove the dangerous debris from the power station.

A harsher environment than the moon itself.

They all malfunctioned under the extreme radiation and rendered useless. These ones were able to be decontaminated as best as possible and placed on display. Obviously, don’t stand next to them.

A billboard for no one.

A lonely billboard offers its old product to an empty street.

Remnants of the past are welded to this security gate.

These are the gates to a once-secret radar facility. Ukraine has had an anti-communist signage law in force for some time, with communist stars and symbols long since removed. This place is an exception, however.

The faded face of a Soviet officer stares at me through the snow.

Despite the warning, I kept moving towards a large structure I could see through the mist.

Things are warming up.

As we approached the enormous “Duga radar” I noticed my radiation meter beeping a lot. I took it out of my pocket to see that things were warming up.

The Duga-1 radar is the largest metal structure I’ve ever seen. It disappears into the snow.

Straining to see the top.

It was hard to see the top of the radar due to the sheer size and the snow falling.

The Duga radar is quite massive.

Although it’s not active any more, it’s too radioactive to do anything with it.

Left, right, and up: it’s bigger than it looks in the photo.

The “Russian woodpecker” as it was known, disappears into the mist.

The Duga radar is so enormous it even has its own elevator.

I made my way to other abandoned buildings. This one was a small nursery school.

Despite the radioactivity, looters left their mark on anything and everything.

Anything not bolted down was removed and sold elsewhere in the country. Poverty makes people do desperate things.

Only silence and radiation fill the halls of this building now.

The infamous site of the nuclear reactor which went into meltdown.
A statue pays homage to the accident. It’s eerily quiet.

The site is still very much alive with gamma radiation.

It’s quiet except for my Geiger counter telling me to leave immediately. The reactor core is in front of me, inside the new shell and crumbling sarcophagus.

This is the new airtight dome which was slid over the crumbling sarcophagus. It’s the largest land-based movable object ever made. It was slid into place in November 2016.

Above is the entry sign to the town of Pripyat. It was only 16 years old when the clocks stopped.

No vacancy: the hotel in the main square of Pripyat.

Walking through the side streets of Pripyat: no power, no water, no human life. The city is a time capsule.

A time capsule: even the communist crest remains atop of this empty high-rise.

Steel, brick and concrete is no match for nature.

Last one out; rip out the lights.

Anything and everything was tugged at and ripped out by looters hunting for scrap metal to sell.

No sounds of children laughing. No signs of life at all. It’s so deathly quiet.

An invisible enemy surrounds me.

These bumper cars may no longer be active, however they remain highly radioactive.
I can see I’m not welcome in this environment.

Looters even removed light bulbs to sell, despite their dangerous radioactivity. Thousands of radioactive household items appeared for sale across the country by looters, from televisions to toilet seats.

The iconic Ferris wheel in Pripyat

There’s no fun to be had at this amusement park.

A testament to man’s ability to create and destroy.

The weather added a gloomy, surreal element to my visit.

The football stadium in front of the field and oval race track.

It’d be a bit hard to play football in this football field today. Nature will always win.

The iconic swimming pool sits empty in the freezing air.

Today, only snow fills the bottom of the pool.

It was surreal to see apartment blocks all around while knowing that no one was watching me.
Not a single soul.

With the windows smashed or taken to sell, the bitter cold envelops the basketball court, causing the wooden floor to rot.

The boulevard of broken dreams.

I spent one day in the exclusion zone which surrounds the nuclear power station of Chernobyl. It was fascinating, surreal and depressing. I’ve been thinking about it for days afterwards. The day has left a lasting impression on me and I’d encourage anyone to see it for themselves.

Here are a selection of interesting video clips from my visit inside the exclusion zone:

Please feel free to share and use these images & the video! I’d love it if you credited me, but it’s not essential.